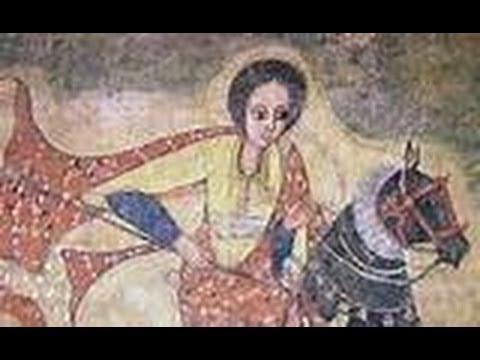 Yodit meaning beautiful in Geez was an Ethiopian Queen of 10th century AD (about 970). Yodit some call her Judith is known for her destruction of the Axumite Empire bringing to an end the domination for over 700 years by Alexandrian Alliance on the affairs of Ethiopians. She also known as with a negative name Gudit meaning nothing having figurative connotation. And since she burned most of the monasteries of the 9 Saints that came from Byzantine or Eastern Roman Empire in Ethiopia. She was also was attributed Esato meaning fire. In Arabic writing of the time she was known as Hwyia meaning fire too. Her family originated from the Christianity resisting in the Nile provinces of Damot . Some give her being Agew and she was the first Queen of Zagwe.

Yodit young beautiful non-Christianized Hebrew girl of Axum belonging to stigmatized family that resistance to Christian conversion by Axumite evangelists. She was loved by a young deacon serving the Church of Zion where the Ark of God resides. She demanded her young lover to bring her from the church a piece of cover of the Tabot (sarcophagi) where the Ark resides as a gift for his love. Her lover did not wait to bring her the piece of the holy cloth with which she made a Shoe and a sharp. Yodit exposed herself in public with her new holy gift. Thus blaspheming the Sacred Church and the Holy artifact. She was caught and her two breasts were cut and sold as a slave to via Yemen to Damascus by the Church authorities. There she was sold to a general who fall in love with her. Her new husband was a prince known as Zenobis, son of the King of Šam. (Syria In Arabic)
Yodit came back to Ethiopia with her husband and waged a war against Axum with her Syric husband. In her first steps she hid herself in the monastery of Debre Bizen in Eritrea. To this day in the monastery female are not allowed to visit. She set out with her husband at the head of an army and attacked Aksum in vengeance for harsh treatment that she had received in the past. And established Hebrewism the religion of Sheba as a state ideology.
Unification of Ethiopia
“As for Abyssinia, it has been ruled by a woman for many years. It is she who killed the Emperor of Abyssinia, known as the hadani and she still holds sway over her own country and the neighbouring regions of the hadani’s country in the interior of Abyssinia”.[1]
Yodit successfully destroyed the Kingdom of Axum and reigned over Ethiopia for 4 decades. “In the seventh year of the reign of the Axumite Del-Nä’ad, She established a new dynasty that continued for 3 centuries.”[2] She expanded the border of Ethiopia west and South including the provinces of Gojjam , Begemder and up unto the Sidama provinces where she is known as Ga’Ewa where the Axum never reached.
[1] sic, translation by Enrico Cerulli (RSE, III, 273); but cf. J. S. Trimingham (Islam in Ethiopia, 52) and Taddesse Tamrat (Journal of Ethiopian Studies, X, No. 1, p. 137, n. 4), after G,. Wiet Configuration de la Terre I, 56, “…in the southern part of the land of the Habesha”
[2] Gädlä ‘Iyäsus-Mo’a